This is a blog about Lappet-faced vultures in Oman

If you click on any images in the blog, it will be opened in a separate window, will be larger and it will be easier to see detail. Please leave comments!

A Lappet-faced vulture that was found unwilling to fly in June 2022. It was captured, treated and released ©ESO, IAR.

On 18 June 2022, an adult Lappet-faced vulture was found ill and unable/unwilling to fly.  It was amongst a mixed group of other Lappet-faced and Egyptian vultures at a water trough near the Wadi Sareen Reserve. With the help of the Environment Authority rangers at the reserve, the bird was taken into captivity and kept at the Environment Authority’s Biodiversity Centre in Barka.  Its health was monitored, and it appeared to recuperate to the point that we released it back into the wild on 30 June, having fit it with a GPS tracking device.

During the first days and weeks after release we were a bit concerned because the vulture did not move very much.  We even considered taking it back into captivity.  Happily, since those early days it has been wandering ever more widely.  Maps below. 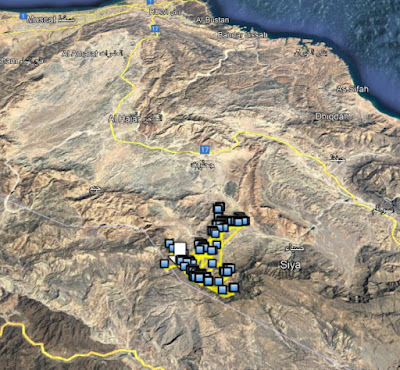 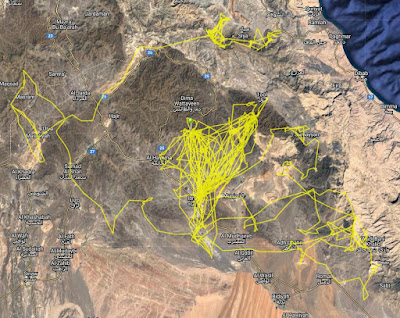 Besides the happy outcome, this story also highlights other things… First, it reminds us that we don’t understand well the threats facing vultures, and how to address them.  The bird in this case may have been poisoned.  If that is true we have no idea about the type of poison or how the vulture came to consume it.  Second, at times injured and sick wildlife are found by the public.  It is important that the safety of both the animal and the helping human are kept in mind.  If you find an injured or sick vulture or other raptor, try contacting the Environment Society of Oman or the Environment Authority.  You can also leave a message on the blog, and with luck we’ll see it soon and get back to you, with some advice.

You can read more about the work we are doing on Lappet-faced vultures by visiting ESO's Facebook page (here).  And here is a video about the work 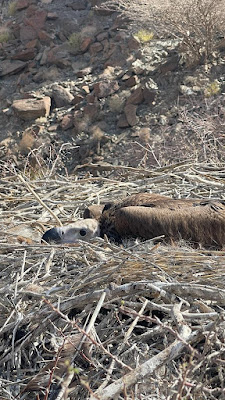